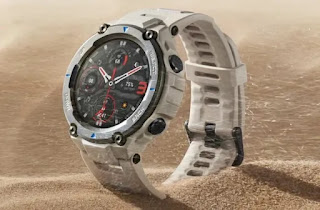 Amazfit has recently unveiled a new model called T-Rex Pro which is built upon the foundation of its T-Rex watch that the well-known wearable company launched at CES 2020. At a glance, the new watch may even look almost similar to its 2020 sibling but it appears to be even more durable.
According to Amazfit, the new T-Rex Pro has passed 15 military-grade endurance tests which are three more than last year’s T-Rex. Even the company didn’t clearly list down the exact tests that the watch has gone through, T-Rex Pro is apparently able to withstand 70C to -40C and has humidity as well as salt spray resistance level of 240 hours and 96 hours, respectively. 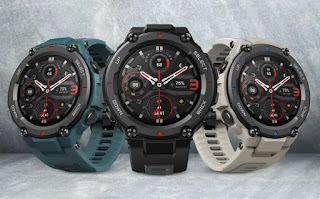 Equipped with a 1.3-inch AMOLED display, the T-Rex Pro also offers a water-resistance rating of 10 ATM which means that it can withstand a water depth of up to 100 meters. In addition to having a heart rate sensor, the watch also comes with plenty of other sensors including blood oxygen (SpO2), accelerometer, gyroscope, geomagnetic (compass), ambient light, and barometric altimeter.

Amazfit also said that the T-Rex Pro can support four satellite navigation services including GPS, GLONASS, BeiDou, and Galileo. In terms of workout tracking, the watch which works in hand with the analytical algorithm from the world-famous FirstBeat is apparently able to cover more than 100 types of workouts while the company’s own ExerSense algorithm can also detect and record eight types of workout automatically including running, walking, and swimming.

Another major attraction of the T-Rex Pro is its long-lasting battery life which can go up to 18 days as well as 40 hours of continuous GPS usage. In terms of availability, the Amazfit T-Rex Pro is now already available for pre-order in Malaysia through the company’s official Shopee store for RM 659.

at March 30, 2021
Email ThisBlogThis!Share to TwitterShare to FacebookShare to Pinterest
Labels: AmazfitT-RexPro, coming, Fitness, for, Malaysia, RM659, Rugged, to, Watch