Game launchers are notorious for causing systems to consume more power and if you’re on a laptop, leaving those programs to operate in the background while not connected to a power source clearly means that its battery is going to run out of juice a lot faster. With the Epic Games launcher, it’s actually even worse.
A study by PC World found that running the Epic Games Store (EGS) launcher in the background of a Microsoft Surface Pro 7+ equipped with an Intel 11th generation Ice Lake CPU consumed up to 20% more battery power than when the Steam launcher was active. Moreover, the site found that running just the Steam launcher alone in the background made little to no impact on the battery life of the Surface Pro 7+.

Statistically, the laptop’s battery lasted a total of 587 minutes with Steam active, while running it with the EGS launcher reduced that time to 482 minutes. 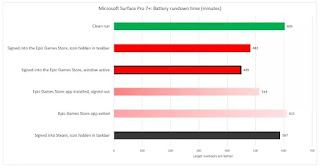 It’s a similar story with a Ryzen-based Surface Laptop 3, in which PC World noted that a clear run with the Steam launcher active depleted its battery in 472 minutes, while another run with the EGS launcher depleted it faster by 434 minutes; that’s approximately an 8% difference.

This marks the second time that Epic Games’ launcher has come under the spotlight. Back at the end of 2020, the digital distribution store gained attention when it was discovered that just running the app in the background was causing AMD Ryzen CPUs to run 20°C higher than average. 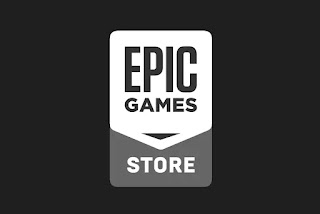 It was discovered that the surge in temperature was being caused by the launcher sending data to a server belonging to Epic Games. Then, as now, the only solution to the issue was to simply disable or shut down the launcher.
at March 30, 2021
Email ThisBlogThis!Share to TwitterShare to FacebookShare to Pinterest
Labels: 20Percent, Battery, Drains, Epic, Games, Laptops, Launcher, More, on, Reportedly, Steam, Than