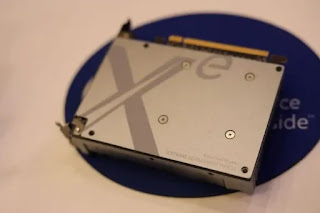 On the surface, the teaser 33-second clip looks unassuming and simply looks like very much like a visual effects artist’s impression of the Xe-LP GPU, that then gets hit by a beam of light and transforms it into the Xe-HPG GPU. Of course, thanks to some eagle-eyed sleuths on the internet, it’s become clear that there is more to the clip’s theatrical display.

If you paused the clip around the 17 and 18-second mark, you’ll see the code “79.0731W” appear at the bottom-right corner of the base of the chip’s platform. Then, at the 22-second mark, the video shows four lines of binary code.

As it stands, the first line of code has yet to be deciphered, but speculation suggests that the last two digits are the number of weeks left until the Xe-HPG’s launch, meaning that we could be looking at a November launch.

As for the four lines of code, those have already been cracked, thanks to one internet user who goes by the name “duckofdeath”. Each line of code was apparently a binary number and when strung together, they produce an IP address: 35.160.237.208. Copy that address into your search bar, and you’re immediately transported to the Intel Xe-HPG Scavenger Hunt page. 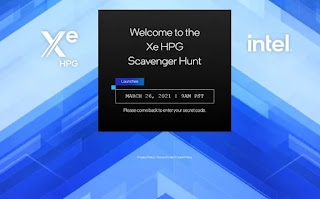 Sadly, the buck temporarily stops there for the moment, with the message that the event kicks off on 26 March and we need to come back with the “secret code”. At the time of writing, there doesn’t seem to be any more clues from the current teaser but having said that, if this truly is a scavenger hunt, then it’s possible Intel will release another teaser clip between now and the kick-off date.
at March 25, 2021
Email ThisBlogThis!Share to TwitterShare to FacebookShare to Pinterest
Labels: Graphics, Hunt, Intel, Kickoff, Later, Scavenger, ThisWeek, XeHPG