Qualcomm May Make Its Own Nintendo Switch-Like Device 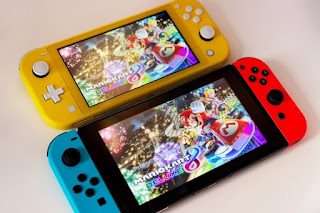 The Nintendo Switch has been in the news quite frequently as of late, with recent 4K output and DLSS reports. Qualcomm is likely taking some notes from the Japanese games company. Recent reports indicate that the mobile chip maker may be trying to board the hype train by making something similar.
Sources to Android Police say Qualcomm is planning its own Android-based games console with a “less traditional form factor”. More specifically, it will likely be running a custom version of Android 12. The device itself will look like a thicker, bulkier smartphone. It will also come with detachable controllers much like the Nintendo Switch Joy-Cons. It will also be packing a 6000mAh battery with Quick Charge. Another similarity to the Nintendo Switch is that this Qualcomm device will have the ability to output to an external display. Though for now it is not yet clear if this will be via a mini HDMI or USB-C, or anything else entirely. Then it will also have the usual smartphone bells and whistles like GPS and even 5G connectivity. That being said, Android Police believes this will make use of the older X55 modem. The device will also not be able to act as a mobile phone, so no making calls and sending SMS from it.

The report also mentions that Qualcomm is aiming for a Q1 2022 release for its Nintendo Switch-inspired device. It may also come with a price tag of US$300 (~RM1240), but it’s unclear if this price includes the detachable controllers, or even the 5G connectivity. Distribution also seems to be direct sales or via US telcos, so it remains to be seen if the company intends to make it available anywhere else.

at March 25, 2021
Email ThisBlogThis!Share to TwitterShare to FacebookShare to Pinterest
Labels: Device, its, Make, May, Nintendo, Own, Qualcomm, Switch-Like