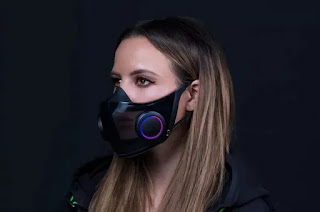 When Razer first revealed that it had converted some of its manufacturing lines to produce face masks last year to help fight the on-going pandemic, fans joked that it wouldn’t be long until we see a branded mask with RGB lighting. Lo and behold, the gaming firm did just that and revealed its Project Hazel face mask concept during CES 2021.
Fast forward back to present time, Razer CEO Min-Liang Tan has recently revealed during an interview with Yahoo! News that the company will begin production for its N95-rated RGB face mask. “You still have to be masked up because there is still the risk factor that even if you’re vaccinated, you still need to be incredibly careful,” said Tan. “So with that in mind, we are going to go ahead and solve the sustainable aspect of the mask which is one of the big things for us. Project Hazel is going to be a reality.”

Besides featuring the brand’s signature Chroma RGB lighting, Razer’s Project Hazel mask is also equipped with quality-of-life and health-related tech enhancements. Its front portion is mostly transparent which allows others to still see your mouth move when you speak. Meanwhile, on its sides are ventilators that not only purify air, but also come with microphones that pick up your voice and output it externally via amplifiers. 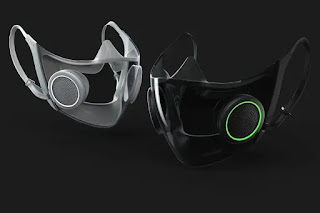 Surrounding the back is a silicon guard that prevents outside air from entering between your face and the mask itself. Its ear loops are also fully adjustable, ensuring for a perfect and comfortable fit for all users.

Unfortunately, Tan did not reveal when the production version of Project Hazel is expected to be released, and the same can be said for its pricing as well. It’s very likely that the hi-tech Razer mask will not be cheap, given that both the brand’s cloth-based face mask sold for RM99 locally. That being said, there’s also a chance that the upcoming mask would also be sold out in mere hours, so do keep that in mind just in case you’re planning on procuring a unit for yourself.

Oh, just in case you missed it. Razer also recently unveiled its own reusable and collapsible stainless steel straw, which you can purchase now via its official website for only RM99. Unlike the Project Hazel mask, however, the straw does not feature RGB lighting. Bummer.
at March 30, 2021
Email ThisBlogThis!Share to TwitterShare to FacebookShare to Pinterest
Labels: Face, Greenlights, Hazel, its, Mask, of, Production, Project, Razer