TikTok has been actively banning numerous accounts and devices in Myanmar, as it scrambles to slow the spread of violent videos and misinformation since the coup d’etat by its military.
According to a Rest of World report, Burmese soldiers have frequently used Bytedance’s platform to post hundreds of videos since the country’s military seized power from the elected government of Aung San Suu Kyi, on 1 February this year. The kinds of video being posted range from pro-government propaganda and misinformation tailored to foment dissent among anti-coup protestors, right down to videos of soldiers brandishing their weapons and threatening to kill protestors.

In addition, many human right activists have drawn similarities from the way the Myanmar military also used social media – namely, Facebook – to fan the flames and spread hate speech against the country’s minority during the early parts of the last decade. On the subject of Facebook, the social network found itself blocked in the country just days after the coup went into effect, with the junta saying that it would disturb the “restoration of stability in the country”. 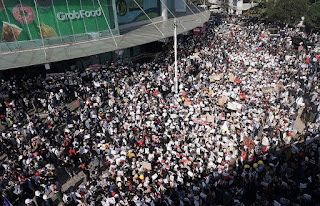 TikTok released a statement, denouncing the Myanmar military’s use of its platform to promote “hate, violence and misinformation”. However, it appears that the social media platform’s response to the offending videos was not fast enough and at this point, did little to curb the spread of said violent content.
at March 25, 2021
Email ThisBlogThis!Share to TwitterShare to FacebookShare to Pinterest
Labels: Accounts, Bans, Content, curb, Effort, in, Myanmar, of, Several, Spread, TikTok, to, Violent