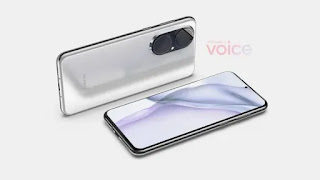 It is said that Huawei is developing a third variant of its Kirin 9000 chipset, which is also rumoured to be featured on its upcoming P50 flagship series. According to a Weibo post by Chinese leakster WHYLAB, the new chipset – known as the Kirin 9000L – will be produced by Samsung Foundry.
The leak suggests that the “L” variant will feature a slower clock speed compared to its siblings, the Kirin 9000 and 9000E. Specifically, the alleged chipset is said to be built on Samsung Foundry’s 5nm EUV (Extreme  Ultraviolet Lithography) process node, and is capable of topping at 2.86GHz via its largest core. Additionally, the 9000L will also feature a Mali-G78 GPU with 18 cores, as well as one large and one small NPU (neural processing unit) cores for AI-based processing.

For comparison, the original Kirin 9000 is capable of reaching clock speeds at 3.13GHz via its largest core, and features a 24-core GPU as well as two large and one smaller NPU cores. Considering the power differences between the two chipsets, it is likely that Kirin 9000L variant will be featured on the standard variant of the yet-to-be-announced P50 series – provided that this leak is to be believed. 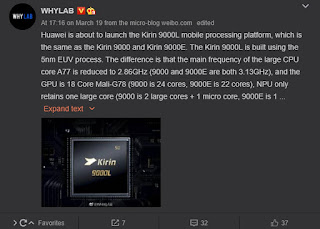 The source’s claim of Samsung’s involvement in the production of the new alleged chipset is shaky at best. At this time, it is not known whether the Korean tech giant has been given permission from the US government to produce chipsets for Huawei. The company was, however, granted a license back in October 2020 to supply the Chinese company with OLED panels for its current and future smartphone production.
at March 25, 2021
Email ThisBlogThis!Share to TwitterShare to FacebookShare to Pinterest
Labels: 9000L, Chipset, Debut, Developing, Huawei, Kirin, May, on, P50Series, Reportedly, Samsung, With