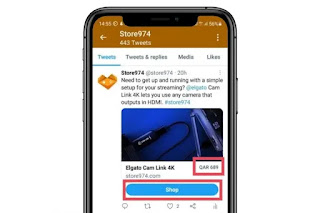 Twitter is looking to join the ranks of Facebook and Instagram in terms of providing users the ability to directly shop for products via its platform. As reported by social media consultant and ex-TheNextWeb journalist Matt Navarra, the social media platform is currently testing out a new Twitter Shopping Card that adds e-Commerce functionality to tweets that link to an online store’s product page.
Navarra credited the discovery to Qatar-based Twitter user Yasser Masood (@YasserM86) who also supplied screenshots showcasing the new feature. As seen from the screenshots, tweets that include links to product pages will feature a new layout which now displays the product’s name and price, the corresponding store’s name, and a large blue shop button.

When approached by TechCrunch, Twitter confirmed that it is indeed developing and trialling this new e-Commerce tool as a way to easily connect users and businesses via the platform. “This demand gives us confidence in the power of combining real-time conversation with an engaged and intentional audience,” a spokesperson explained. “Imagine easily discovering, and quickly purchasing a new skincare product or trendy sneaker from a brand you follow with only a few clicks.”

From what is being presented, this new approach is pitched to be a convenience for both users and businesses, rather than another potentially intrusive way of advertising products. Reason being that tweets such as these are controllable – only appearing on a user’s Twitter feed as long as they follow certain stores or brands that share these posts.

The reach for these e-Commerce based tweets will also be purely organic as it relies on retweets instead of popping up randomly as a suggestion on a user’s feed. The latter approach is often practiced by the platform’s closest competitor, Facebook, which usually slips in an ad or “sponsored” content in between user posts on its news feed.

Twitter noted that the feature is only made available to a small number of users for now, so don’t expect it to be publicly available anytime soon. It is also likely that the e-Commerce tool will potentially tie-in with the platform’s recently unveiled subscription-based Super Follow feature down the line. This allows for content creators or brands to grant subscribed followers with special perks such as exclusive content, loyalty rewards, and even discounts.