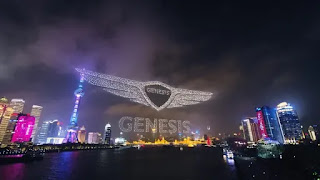 Rather than featuring fireworks to celebrate its official arrival in China, Hyundai subsidiary Genesis had decided to go for something more spectacular: a fully controllable light show in the sky. The Korean luxury car brand lit up the Shanghai skyline with a whopping 3,281 aerial drones on 29 March, breaking the current Guinness World Record for “The Most Unmanned Aerial Vehicles (UAVs) airborne simultaneously.”
The drone-based light show demonstrated an impressive display of formations, including a rendition of Genesis’ logo, 3D-like wireframes of its G80 and GV80 car models, greetings, and much more. You can view highlights of the showcase in the video embedded below.

Prior to this, the record holder for the title was China’s own Shenzhen Damoda Intelligent Control Technology, which used 3,050 drones last year on 20 September. According to Guinness, Russian UAV manufacturer Geoscan and US chipmaker Intel preceded that record with a total of 2,200 and 2,066 units respectively.

Speaking of the latter, Intel opened for the Winter Olympics with a showcase of 1,218 drones back in 2018, where it claimed the same Guinness World Record at that time. The company also provided an aerial light show in Malaysia for last year’s New Year Eve celebrations at Dataran Merdeka, although only approximately 300 drones were used. 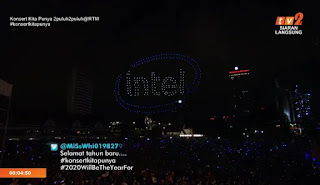 Despite the smaller number used for the local celebration, the cost for the showcase itself was recorded to top at least US$ 225K (~RM 919,710). With that in mind, one could only imagine the amount of money spent for the aforementioned demonstrations that feature even more drones – especially by Genesis.
at April 17, 2021
Email ThisBlogThis!Share to TwitterShare to FacebookShare to Pinterest
Labels: 3000, Arrival, Celebrates, China, Claims, Drones, Genesis, in, New, Over, Record, With, World