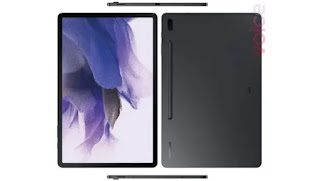 New renders and details featuring the upcoming Samsung Galaxy Tab S7 Lite have recently surfaced online, thanks to leakster Evan Blass (@evleaks). This corroborates an earlier leak by fellow industry insider WalkingCat (@_h0x0d_) back in late February, which featured details and the expected release window of the tablet via an alleged product roadmap from the South Korean tech giant.
According to Blass’ leak, the Lite features a large 12.4-inch LCD display with dual front-facing cameras housed on its right bezel (top, if viewed in landscape orientation), therefore making it similar to last year’s Galaxy Tab S7 Plus model in terms of size and appearance. However, the new variant reportedly comes with a WQXGA LTPS TFT screen, rather than a Super AMOLED panel that’s featured on the Plus.

On the back of the Galaxy Tab S7 Lite appears to be an aluminium body with a dual camera setup situated on the top left corner. Just below the shooters is a magnetised port to hold and maybe charge the S-Pen accessory, which is presumably packaged together with the tablet once it launches. Meanwhile, on the top and bottom of the device are grilles for its AKG-tuned speakers, and a USB-C port is also visible below it. 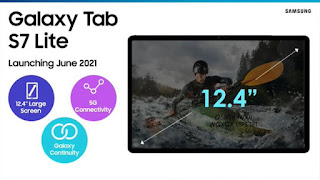 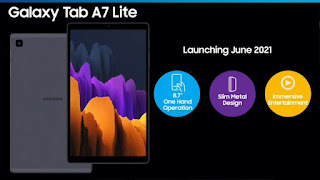 Unfortunately, the leakster did not detail the other hardware specifications of the upcoming tablet. However, according to websites PhoneArena and SamMobile, the device will reportedly feature Android 11 via the brand’s One UI 3.1, a 5G-enabled Snapdragon 750G chipset, and 4GB of RAM. Using last year’s Galaxy Tab S6 Lite as reference, a WiFi-only version of the new tablet is also quite likely.

The Samsung Galaxy Tab S7 Lite is expected to launch alongside the Galaxy Tab A7 Lite. Both of these are expected to debut later this year in June, according to the earlier leak by WalkingCat.