When it comes to music on mobile phones, there’s still nothing like having a portable DAC, and a pair of wired headphones plugged in. The THX Onyx is a new one in the market. And despite it coming from a big-name mainstream company, the thing itself is pretty tiny.
The company says that the Onyx comes with its own THX AAA DAC, as well as the ESS Pro DAC chips inside. Adding to those is MQA support. There’s also three audio indicator LEDs that tell you the quality of the music you’re currently listening to. If you know your stuff, there’s probably no need for this. But it may be useful for the uninitiated who want to hear the difference between standard quality and top quality music, and being told which is which. 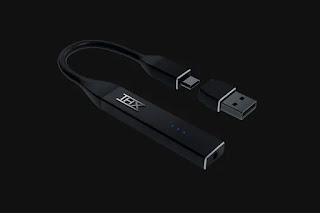 THX did not mention the physical size of the Onyx, but from the images, it looks smaller than the average pen. It makes use of the USB-C port, addressing the lack of a 3.5mm audio jack on most phones these days. You can even fold it when not in use, as the two ends attach magnetically. This allows it to be used as a cable tie for your extra long headphone cables. And if you want to use it with a PC, there’s also a USB-C to USB-A adapter.

The THX Onyx is available to us in Malaysia, and you can get it via the Razer online store. Probably not too surprising, since the two companies work together quite a lot in the past. It is very pricey though, coming in at RM1190.