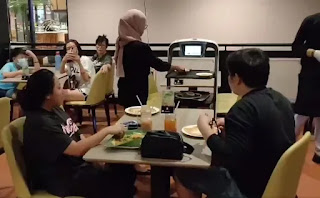 In a move to reduce physical contact during the ongoing COVID-19 pandemic, popular local franchise Original Penang Kayu Nasi Kandar has introduced robot waiters to help serve its customers. According to the restaurant’s owner and managing director Burhan Mohamed, the robots have been deployed at its SS2 and Citta Mall outlets, with more expected in the near future.
The robot waiter originally debuted at Original Penang Kayu Nasi Kandar’s Citta Mall restaurant earlier in March, he added. Due to positive reception from customers, the franchise had decided to order four more units – each costing around RM 43,000 per unit – from Secure Robotics which are expected to arrive in the middle of April this year. Burhan noted that the machines will not be used during peak hours as they could get in the way of customers and human waiters.
Based on the video uploaded on its official Facebook page, the franchise is utilising the popular PuduBot indoor delivery robot by Shenzhen-based Pudu Robotics, which is locally distributed by Secure Robotics. It is equipped with various advanced tech such as LIDAR and 3D vision sensors to help with positioning and obstacle avoidance. “PuduBot is a clever humanoid robot designed for restaurants, saving labor and increasing your efficiency,” wrote Secure Robotics on their official Facebook page.

On top of being programmable for table-to-table deliveries, the machine comes with a middle compartment for transporting large items and can also be customised to feature multiple levels of serving trays. The top portion of the robot is equipped with an LCD screen that displays different facial expressions, granting it a friendly personality. 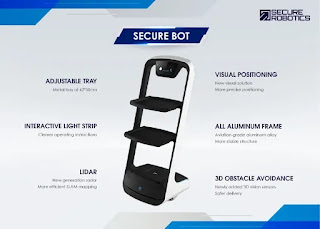 If the Pudubot looks familiar, it is because the same model has been deployed by different restaurants in Malaysia as well. These include the KyoChon outlet at The Gardens Mall, JBorn Cafe & Bistro in Johor Bahru, Ah Kor Kopitiam in Melaka, and many others. 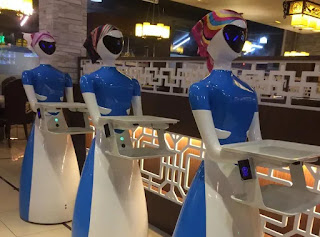 For your reference, the first ever Malaysian eatery to feature robot waiters belongs to CH Premier Restaurant in Kuching, Sarawak. Along with its initial opening back in October 2016, the premise debuted four robot waiters imported from Kunshan, China. These consisted of three Goddess models and one smaller robot known as Lolita, which are still in service to this day.
at April 17, 2021
Email ThisBlogThis!Share to TwitterShare to FacebookShare to Pinterest
Labels: Kandar, Kayu, Later, Month, More, Nasi, Original, Outlets, Penang, Receive, Robot, This, to, Waiters