DualSense Controllers To Come With Two New Colours Next Month 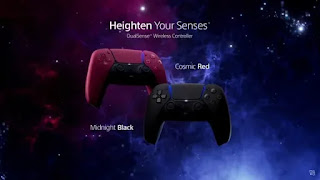 Rumours about the DualSense controllers getting new colourways have been swirling around for the past week. But now, Sony Interactive Entertainment has confirmed that the rumours are true. The company also said that they will be available starting next month.
The announcement comes via the official PlayStation blog. The two new colourways are called Midnight Black and Cosmic Red. The former is basically an all-black version of the DualSense controller. As for the latter, the white half is swapped with burgundy red. Beyond that, it doesn’t look like there are any other differences. The PlayStation logo is still in all black, and the face buttons are still in grey.
In the blog post, SIE clarified that while both new colours for the DualSense will be available next month, exact dates will vary by location. This sometimes may mean that they won’t even show up in certain markets. We saw this happening with the DualShock 4 back buttons accessory. But with the official PlayStation Asia Facebook page sharing the two new DualSense colours, and the new colours showing up on the Malaysian page of the PlayStation website, the possibility of them arriving here is ever so slightly higher.

Of course, there’s no mention of price anywhere just yet. Ideally we’d like to see them being priced similarly to the standard white DualSense controller. That being said, it’s more likely that the different colours will see a slight premium added, like the way it is for the DualShock 4 controllers.

at May 17, 2021
Email ThisBlogThis!Share to TwitterShare to FacebookShare to Pinterest
Labels: Colors, come, Controllers, DualSense, New, NextMonth, to, Two, With