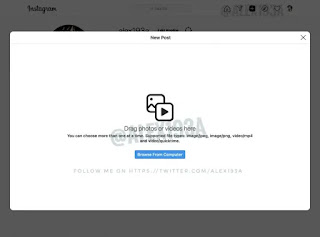 Instagram has allowed users on desktop to peruse their feed via its official website for a long while now. Activities such as posting images to the platform, however, are still exclusive to its app on mobile devices. But according to a recent discovery by developer and leakster Alessandro Paluzzi, this limitation could change in the near future.
The leakster shared a set of images on Twitter, demonstrating the allegedly upcoming upload-from-desktop ability. Paluzzi explained that he discovered the feature while doing some reverse engineering on Instagram’s website.

Upon selecting “New Post”, users will be prompted to a pop-up where they can either drag-and-drop an image or click the “browse from computer” button to select a specific photo from their computer. After uploading, they’ll be greeted to several familiar Instagram menus such as selecting the desired aspect ratio (square, portrait or landscape) and then the different types of filters they wish to apply, as well as the option to manually edit their photos. Lastly, users will arrive at a screen where they can enter a caption, tag people, add location and so on.

Enabling users to upload their images from PC (or Macs) would greatly benefit photographers who rely on digital or mirrorless cameras, and especially those who edit their work via software such as Adobe Photoshop Lightroom. The discovery of Instagram’s supposedly upcoming feature is somewhat timely as Twitter had also updated its platform to allow high resolution photos to be uploaded and viewed by its users. In that regard, it is not known if images uploaded from desktop on Instagram’s website will retain their original resolution or end up being compressed.

As for when this new feature will be made available, Paluzzi noted that it might take a while as it is still currently being tested internally.

at May 23, 2021
Email ThisBlogThis!Share to TwitterShare to FacebookShare to Pinterest
Labels: Desktop, Inage, Instagram, on, Reportedly, Testing, Uploads