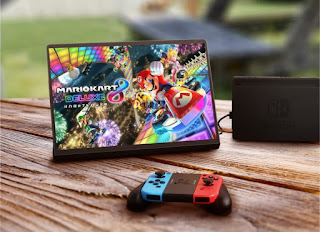 Lenovo has recently released a teaser featuring a new tablet via its official account on Chinese social media platform Weibo. Unlike the brand‘s typical offerings from this category, this new device is shown to feature a HDMI input.

As demonstrated in the image provided, the tablet could also function as a portable display that can output or mirror visuals from certain sources via a HDMI cable. In the teaser’s case, the new Yoga device is shown connected to a docked Nintendo Switch console, with Mario Kart 8 Deluxe displayed on the tablet’s screen.

Needless to say, this is pretty handy if you wish to play your games outside on a larger screen. That is, if you don’t mind lugging around the Switch’s dock along with you and at the same time finding an outdoor plug for it.

Of course, Nintendo’s console is just one of the many possible uses for the new Lenovo tablet’s HDMI-in support. With the feature, the device is definitely capable of being used as a secondary display for your PC and laptop as well. Although it may not be as generous as an actual 20+ inch monitor, users such as streamers could utilise it for displaying live chats or other data that does not require a larger screen size. 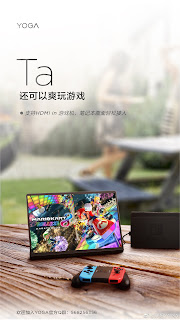 Lest we forget, the new Yoga is still a tablet which is surely capable of doing whatever a tablet can do. However, the company has yet to reveal what kind of specifications we’ll be expecting at this time. It’s not specified if it will be running Android or Windows either.

From our observation of the image, it doesn’t appear that the device does not feature any front-facing cameras on its slim bezels. It is also shown to sport a thin form factor – save for the bottom, which looks like the grip handle from the Lenovo Yoga Tab/Smart Tab series. Seeing how the tablet is positioned, we can safely assume that it also comes with a rear kickstand.

Interestingly, also featured on the teaser is the chemical element symbol for a rare metal material known as Tantalum (Ta). How this relates to the tablet is not known for now. Hopefully we’ll find out more regarding this new Lenovo Yoga device soon enough.

at May 12, 2021
Email ThisBlogThis!Share to TwitterShare to FacebookShare to Pinterest
Labels: Feature, HDMI, Input, Lenovo, New, Tablet, Teases, With, Yoga