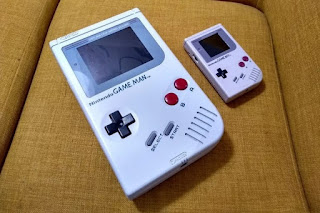 The original Nintendo Game Boy was released back in 1989, and was relatively large for a portable gaming device. Now, 32 years later, there is a Game Man that takes the size to new extremes.

The Game Man is the project of a modder who goes by Grumpy Modeler on YouTube. In a side-by-side comparison, it towers over the Game Boy. Fitting, in a sense, if you imagine the handheld ageing like a person does for 32 years. But because of the size, it’s actually very impractical to play. 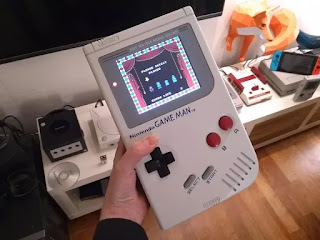 And despite the Game Man name, it’s probably more accurate to call it an NES in a giant Game Boy shell. After all, it actually takes NES cartridges, and uses an NES motherboard on the inside. The quarter-inch audio jack outputs to an external display, even if it has its own 5.6-inch 640 x 480 LCD screen. But like the original Game Boy, it runs on AA batteries.

This makes another entry into the pretty substantial list of Game Boy modding projects. You can make your own Game Man if you want to, and have a 3D printer. You can also use a Raspberry Pi or other hardware if you choose not to use an NES motherboard. You can find the original video demonstration of the thing as well as the assets to make your own via the links below.

at May 07, 2021
Email ThisBlogThis!Share to TwitterShare to FacebookShare to Pinterest
Labels: an, Boy, Game, Makes, Man, Modder, of, Oversized, Parody, The