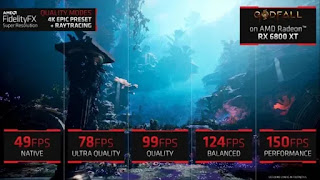 Besides the Zen 3-powered APUs and new Radeon RX 6000M series GPUs for laptops, one of the more important announcements of AMD’s Computex 2021 keynote was the progress of its FidelityFX Super Resolution (FSR) upscaling technology. More to the point, the company also provided a key detail many gamers have been looking forward to: a release date for FSR.
As a quick primer, FSR is to AMD what NVIDIA’s DLSS upscaling feature is to its RTX technology. Unlike DLSS, though, FSR doesn’t require the use of proprietary and specifically designed core for the task.

To our surprise, AMD says that FSR will not only work on its hardware, but also on NVIDIA’s GeForce products. In the case of the keynote, the company showcased the GeForce GTX 1060 running with FSR, with the video demo showing the card supposedly gaining 41% more framerates with the feature enabled.