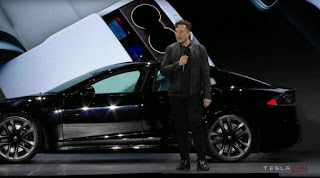 Elon Musk, Bitcoin aficionado and CEO of Tesla, recently held the launch for his company’s latest car, the Model S Plaid. As you’d expect, the electric vehicle is loaded with the latest state-of-the-art technology on the current market, the most important piece of technology for us perhaps being its new and improved infotainment system.
Specifically, the Model S Plaid’s infotainment system is powered by AMD’s Navi 23, a GPU that was initially rumoured to make its debut with the parent company’s alleged Radeon RX 6600 GPU series. To that end, the launch marked the first time the GPU’s power was being demonstrated and during a non-AMD keynote to boot.

Details of Navi 23 is still scarce but from what we know, the GPU is expected to have up to 2048 Stream Processors and support up to 8GB GDDR6 graphic memory on both the RX 6600XT and RX 6600. As for its performance, Musk went as far as to say his car’s infotainment system was as powerful as a Sony PlayStation 5 (PS5).

That wasn’t an empty boast either; putting his money where his mouth is, Musk gave a live demonstration of his car’s Navi 23-powered infotainment system running Cyberpunk 2077 with the console’s 17-inch display as the output and at its maximum resolution of 2200 x 1300 pixels.
at June 25, 2021
Email ThisBlogThis!Share to TwitterShare to FacebookShare to Pinterest
Labels: Claims, ElonMusk, Infotainment, New, on, Par, Playstation5, RDNA2-Powered, System, Tesla, With