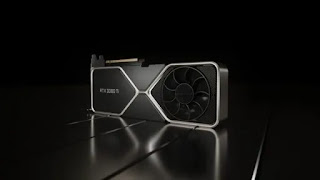 After months of speculation and rumours, NVIDIA has finally let the cat out of the bag on its new GeForce RTX 3080 Ti and RTX 3070 Ti graphics cards. Announced during its Computex 2021 keynote earlier, the two cards serve as a step-up to the currently existing RTX 3080 and RTX 3070 graphics cards.
Starting with the RTX 3080 Ti, as per the initial reports, the card comes with 12GB GDDR6X, 34 Shaders-TFLOPS, 67 RT-FLOPS, and 273 Tensor-TFLOPs. Additionally, the card also has 10240 CUDA Cores, a 19Gbps memory clock, as well as a 384-bit memory bus. 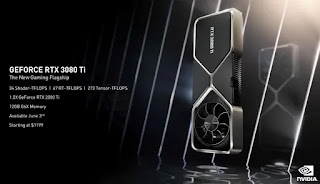 In terms of performance, NVIDIA says that the card is 1.5x more powerful and faster than its last generation RTX 2080 Ti. That power does come with a higher TGP consumption of 350W, which is 30W more than the RTX 3080. Elsewhere, the card has a boost clock of 1665MHz, 112 ROPs, and a memory bandwidth of 912GB/s. 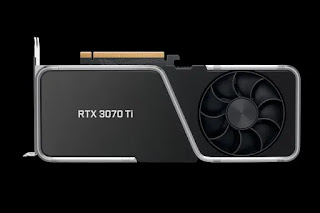 Next on the list is the RTX 3070 Ti. Aesthetically, the card’s cooler shroud definitely looks different from the RTX 3070; rather than use the same dual front-facing fan design, NVIDIA has opted to use the inverted dual-axis flow through design, originally introduced with the RTX 3080 and RTX 3090.

Specs-wise, there’s not a whole lot of detail about the RTX 3070 Ti besides what was showed on screen, but the card is definitely getting 8GB GDDR6X graphics memory, and not the standard GDDR6. Additionally, the card will have 22 Shader-TFLOPS, 42 RT-TFLOPS, and 174 Tensor-TFLOPs. In terms of performance, NVIDIA says the card is 1.5x more powerful than the RTX 2070 Super, and approximately 20% faster than the current RTX 3070. 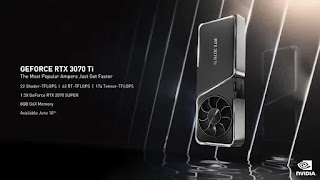 As for availability, the GeForce RTX 3070 Ti is slated for 10 June and will have an SRP of US$599 (~RM2471).
at June 01, 2021
Email ThisBlogThis!Share to TwitterShare to FacebookShare to Pinterest
Labels: Arriving, Both, GalaxGeforceRTX3080Ti, Month, Now, NVIDIA, Offical, This