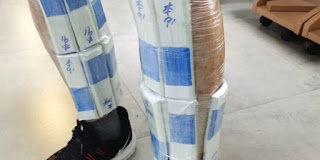 As you well know, the ongoing chip shortage and COVID-19 pandemic has been causing a crisis in the PC world and that shortage is reflected in how smugglers in China have been getting – and we’re using this word sparingly – creative in their attempts to smuggle PC components. Case in point, a truck driver and his co-driver crossing the Hong Kong – Macau Bridge attempted to smuggle a bunch of CPUs across the border by wrapping them around their bodies.

According to multiple reports, the driver and his cohort were detained by Hong Kong customs officials after it was discovered that the suspects had used cling-film to wrap 256 Intel CPUs on to their bodies. Specifically, the CPUs are 10th generation Core i7-10700 and Core i9-10900K CPUs, with a total worth of US$123000 (~RM515431).

The punchline here is that this wasn’t a one-off incident; more than a week later, another smuggling attempt was foiled, with customs officials finding 52 Intel CPUs hidden inside both the driver and passenger seats. Then, earlier this week, the Hong Kong customs seemingly hit the motherlode when it seized 2200 CPUs and 1000 RAM modules, all hidden within a container truck. Along with hundreds of smartphones and cosmetic items, with a total market value in excess of US$4 million (~RM16.8 million). 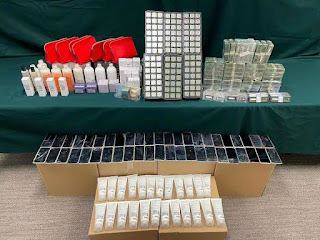 Alas, the more recent smuggling attempts, however, did not involve the driver and passenger cling wrapping CPUs to their bodies or stuffing them up personal orifices. The latter most likely to hurt if one were to attempt it with sharp-edged items like a CPU.
at July 19, 2021
Email ThisBlogThis!Share to TwitterShare to FacebookShare to Pinterest
Labels: 256, Around, Bodies, by, Chinese, CPUs, Smuggle, Smugglers, their, Them, to, Try, Wrapping