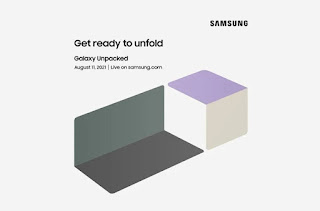 Samsung has updated its social media channels to confirm the date for its upcoming Galaxy Unpacked event. Slated to happen on 11 August 2021 at 10pm local time via the tech giant’s official website, the online-only launch event will undoubtedly see the debut of its latest foldable smartphones – namely, the Galaxy Z Fold3 and Galaxy Z Flip3.

While not officially confirmed by the brand itself, the graphic elements featured on the accompanying promotional image is a big giveaway on what to expect – along with the event’s not-so-subtle “Get ready to unfold” tagline. As you may recall from our report published in June, it was previously rumoured that Samsung will be launching the aforementioned foldable devices during a major Unpacked event that was tipped to be held in August.

Industry insiders also suggested that the tech giant will debut two new Galaxy-branded smartwatches along with the Galaxy Z Fold3 and Galaxy Z Flip. These are believed to be the Galaxy Watch4 and Galaxy Watch Active4, which would feature a refreshed version of Wear OS that is jointly-developed by both Samsung and Google. Not forgetting that some alleged details regarding the specifications for all four upcoming devices were also leaked in earlier this month.

Those who’ve been following Samsung’s various events for the past few years may have noticed something significantly different about this Galaxy Unpacked as well. Most obvious is the absence of the brand’s second highly anticipated flagship smartphone line, the Galaxy Note series, that is often revealed in the third quarter of every year. This could very well mean that rumours of the series’ cancellation may end up being true after all, which would definitely disappoint a good number of fans.

Meanwhile, Samsung Malaysia says that those registering their interest via the event’s page (link provided below) are also entitled to receive a RM300 e-voucher which can be used at the brand’s online store after pre-ordering the new Galaxy devices. However, the company noted that the e-voucher is only applicable on selected Samsung wearables & accessories.

at August 10, 2021
Email ThisBlogThis!Share to TwitterShare to FacebookShare to Pinterest
Labels: 11August2021, Be, Confirms, Event, Galaxy, Held, on, Samsung, to, Unpacked