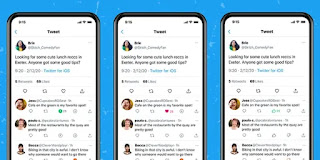 Twitter has confirmed via its official Support account that it is testing a new user approval function for tweets in the form of like and dislike buttons. However, the platform noted that the new feature will only be available to select users on iOS for now.

In regards to “disliking” a tweet, Twitter claims the function would act similarly to Reddit’s downvote feature, where it is used for researching on what type of replies users find relevant in a conversation. The company added that dislikes will be hidden, whereas the number of likes will be publicly visible. That being said, the number of dislikes will only be visible to the owner of the tweet and won’t affect the order of the replies. Users will be notified if their tweets receive likes, but no alerts will be given out when it receives the opposite.

According to user @DrOlufunmilayo, those on the iOS version of Twitter will see the prompt shown below. As seen from the screenshot, the new feature will completely replace the existing “heart” icon that is found alongside the reply, retweet and share buttons underneath a tweet.

A “dislike” button for social media platforms has always been a controversial issue. Prior to this, Twitter’s product lead executive Kayvon Beykpour responded to user suggestions for the feature by saying she disagreed with it. She explained that it’s difficult to find “a balance of incentives that rewards positive behaviour & disincentives toxic behaviour.”

Facebook users, in particular, have been requesting the thumbs down button for a long time, with a new rumour cropping up almost yearly. Mark Zuckerberg, Facebook CEO, stated in 2014 that the social media giant had considered adding a dislike button but was eventually scrapped due to its risk of being too, well, negative. The platform instead opted for Reactions, which allows users to react using emojis. Interestingly, Twitter is rumoured to also introduce emoji reactions similar to Facebook’s in the near future.

YouTube, on the other hand, has been testing on hiding dislike counts on videos from public view, similar to what Twitter is doing. The reason for this could be because many users argue that such a feature could be misused for abuse and bullying. At this current time, it is still unclear whether Twitter plans to expand the feature to the general public or keep it as just a researching tool for engagement.
at August 01, 2021
Email ThisBlogThis!Share to TwitterShare to FacebookShare to Pinterest
Labels: and, Dislike, Feature, for, iOS, is, Like, New, Selected, Testing, Twitter, Users