Updated PS5 Has A Smaller Heatsink According To Teardown 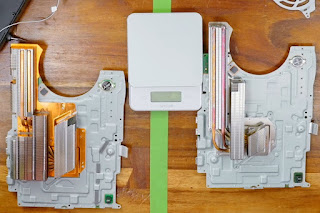 We’ve seen a new variant of the PS5, a first revision, if you will, go through SIRIM. In Australia, one of the markets that it is already available in, we can see that it also has a new screw, and weighs about 300g less. There is a new teardown video, which shows that the weight difference manifests in the form of a smaller heatsink.

Austin Evans on his YouTube channel got his hands on the new revision PS5 from Japan, which confirms the new, tool-free friendly screw for the stand. The wireless module is very slightly different, which also confirms that what was noted in the documentation we saw before this. But most significantly, the heat sink is significantly smaller. And it explains the 300g weight reduction.

The argument here is that the smaller heat sink leads to less effective cooling, especially over time once dust starts building up inside the PS5. That being said, the temperature test in Evans’ video only takes into account the exhaust temperature – rather than that of the components – of the two versions of the console. And it’s a difference of about three degrees Celsius, with the newer model being the warmer one.

Evans argues that the original PS5 model was “over-engineered”, and that the newer revision means a production cost reduction while not impacting performance. But that remains to be seen, especially with long term use and the actual internal components’ temperature.

at August 31, 2021
Email ThisBlogThis!Share to TwitterShare to FacebookShare to Pinterest
Labels: A, According, Has, Heatsink, PS5, Smaller, Teardown, to, Updated