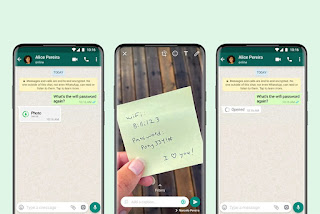 WhatsApp is finally rolling out its new “view once” feature to the general public in its latest update after being released a little over a month ago in the Android beta. The feature allows you to send photos and videos that can only be viewed once by the recipient, disappearing completely thereafter.

Similar to the disappearing messages in Snapchat and Instagram, it aims to give users more control over their privacy. Using it is simple: when sending pictures or videos to someone, click on the “1” button on the left of the send button. The recipient won’t see a preview of what you sent so they’ll have to click it to find out the content. Once they’re done viewing, you’ll see the message now says “opened” and they won’t be able to access it again. Of course, keep in mind that they can still take a screenshot and unlike Snapchat, you won’t be notified.

WhatsApp gave a use case example of sending somebody your WiFi password without having to worry about them sharing it with others, or maybe something like photos of new clothes you’re trying on at a store which you don’t need to take up your storage space. Seeing as how View Once messages are still end-to-end encrypted, maybe the feature would also be useful for espionage or just sending some “work-inappropriate” content.

The photos and videos sent through View Once can remain unopened for 14 days before they expire. Apparently, View Once messages can also be restored through backup if it was still unopened during backup. WhatsApp will also be able to see what you sent if the recipient reported your message for problematic content that breaks their terms of service. Obviously, you won’t be able to forward, save, star, or share View Once media.