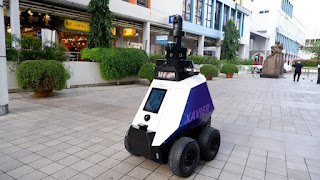 It looks like Boston Dynamics’ Spot won’t be the only robot patrolling around in Singapore. The country’s Home Team Science and Technology Agency (HTX) announced on Sunday that it has begun a three-week trial of two robots, known as Xavier, to patrol the city state’s Toa Payoh Central district. During its trial phase, the duo will autonomously navigate through the high foot traffic location to aid public officers deter “undesirable social behaviours.”

Rather than an intimidating chrome cladded bipedal law enforcer, the Xavier robots are quad-wheeled autonomous drones with cameras (including one with 360-degree capability) and a display, which are more R2-D2-like rather than Robocop. According to HTX, should its cameras detect individuals exhibiting the aforementioned misbehaviours, the robots will trigger real-time alerts to the command and control centre. 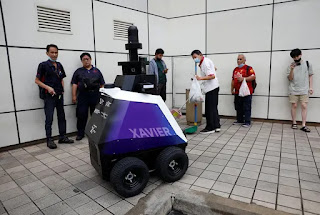 For clarity, the agency specified that offenses categorised as such include smoking in prohibited areas, illegal hawking, improper parking of bicycles within Toa Payoh Central’s HDB Hub, congregation of more than five individuals, and motorised active mobility devices and motorcycles on footpaths. If detected, the Xavier robots will display the appropriate message on its built-in screen to educate the public and deter such behaviours. A mere slap on the wrist, but embarrassing nonetheless for offenders, especially after getting nagged by a robot in public. 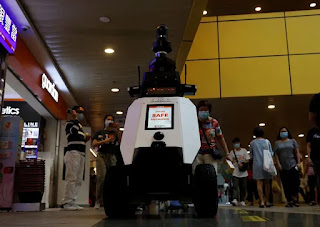 HTX iterated that the Xavier patrol robots would not be used for Singapore law enforcement during the three-week trial, which starts from 5 September 2021. “The deployment of Xavier will support the work of public officers as it will reduce the manpower required for foot patrols and improve operation efficiency,” the agency said.
at September 08, 2021
Email ThisBlogThis!Share to TwitterShare to FacebookShare to Pinterest
Labels: Aid, and, Authorities, Enhancing, Health, in, Patrol, Public, Robots, Safety, Singapore, to, Trials