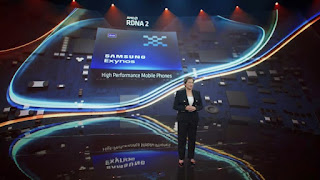 Samsung has confirmed that its upcoming Exynos 2200 SoC will indeed ship out with support for ray-tracing. Support for feature, which is currently an optional aesthetic available for desktop GPUs, is possible thanks in no small part to the Korean tech giant’s collaboration with the CPU and GPU maker, AMD.

The confirmation was posted by the brand itself via its official account, Samsung Exynos, on the Chinese social media platform, Weibo. Technically speaking, the post sounds more like the company giving the equivalent of a layman’s breakdown about the functions of ray-tracing, followed by a quick confirmation of the technology’s presence in its upcoming Exynos 2200 SoC.

As it stands, initial reports already point towards the Exynos 2200 using an 8-core layout, running in a 4+3+1 configuration. Specifically, that’s four high-efficiency cores running at 1.73GHz, three mid-tier cores at 2.5GHz, and one high-performance core at 2.59GHz. The GPU, codenamed “Voyager”, are provided by AMD and are based on its RDNA2 GPU architecture. Further, it is rumoured to feature six Compute Unit, which translates into 384 Stream Processors, along with six Ray Accelerators. 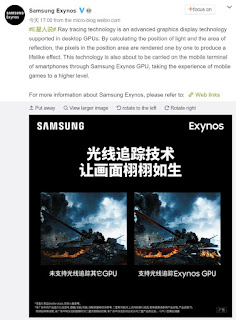 Incidentally, the posting also included a poster that allegedly shows the difference between a GPU running without and with ray-tracing cores. For that matter, we strongly suggest to treat the image with a moderate amount of skepticism, for the simple fact that activating ray-tracing does not add additional burning vehicles to the scene.
at October 05, 2021
Email ThisBlogThis!Share to TwitterShare to FacebookShare to Pinterest
Labels: 2200, Confirms, Exynos, Ray-Tracing, Samsung, SoC, Support, With