Xiaomi Unveils Its Own Smart Glasses 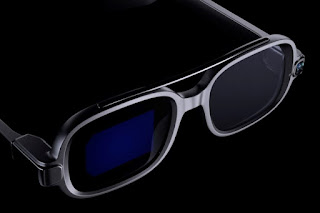 Beyond phones, Xiaomi has made just about every other smart device under the sun. So it was only a matter of time before the company gave smart glasses a go. And it looks like that has finally happened, as the company announced the simply named Xiaomi Smart Glasses.

On the face of it, the company’s smart glasses works just about as you’d expect. As Xiaomi describes it, the company’s smart glasses uses MicroLED for its display, which is claimed to be longer lasting and has higher pixel density than OLED. It also works in quite the non-conventional way. Rather than just projecting an image in front of your eye, this pair of smart glasses uses a neat combination of reflection and refraction to direct images to the wearer’s eye, all with a single lens.

While the Xiaomi Smart Glasses has its display on the right lens, the left side houses its 5MP camera. Compared to the smartphones of today, the pixel count is pretty modest. But it is still enough to allow for more than just taking photos. With it, you can get text translations in real time. For those worried about privacy, the camera also has an indicator light to let other people know that it is in use.

Overall, the Xiaomi Smart Glasses looks to be the smallest one among its kind, being just slightly bulkier than your average eye wear. It also weighs in at 51g. Though all that being said, the company did not say if it will actually be selling these smart glasses to the average consumer.

at October 01, 2021
Email ThisBlogThis!Share to TwitterShare to FacebookShare to Pinterest
Labels: Glasses, its, Own, Smart, Unveils, Xiaomi