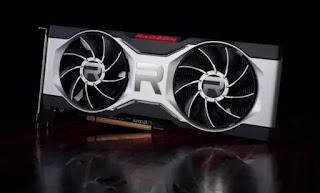 Earlier today, AMD tweeted via its official Radeon RX account that it will be revealing the latest addition to its RDNA2-powered Radeon family on 3 March. More importantly, the tweet includes a 20-seconds render clip, showing off what is clearly a Radeon card equipped with a reference dual-fan cooler shroud.

As these things go, the dual-fan cooler is very likely a hint that AMD’s next graphics card will target the mainstream and mid-range market, meaning that the card could possibly be the long-rumoured RX 6700XT.

As a quick primer, previous reports indicated that AMD planned on releasing a graphics card that was less powerful than the 6800 series and 6900XT, equipped with a Navi 22 GPU. Additionally, the card is rumoured to ship out with 12GB GDDR6; 4GB less than what all current high-end Radeon RX 6000 series cards currently have. Not long after, the “official” logo of the RX 6700XT was leaked online, giving us an idea what we can expect. This was somewhat confirmed later by an EEC submission by Gigabyte that included no less than three variants of the card.

Unfortunately, the tweet doesn’t include any further details about the card’s performance, nor does it include any specifications. That said, we at least know that, because the card is made with AMD’s RDNA2 technology, we also know that the card’s GPU will be based on the company’s 7nm die lithography. 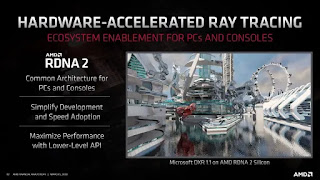 One additional takeaway that we think bears noticing is the ray-traced reflections at the bottom of the card, literally. To date, AMD has not mentioned anything new about the feature since it last released its Hangar 21 tech demo, and frankly, it does seem like a subtle hint that the company could also be gearing up to announce the availability of the feature on 3 March. So, fingers crossed on this.
at February 25, 2021
Email ThisBlogThis!Share to TwitterShare to FacebookShare to Pinterest
Labels: 3March, AMD, CoolderShroud, Dual-Fan, Mid-Range, Radeon, RadeonRX6000, Reveal, ShowsOfff