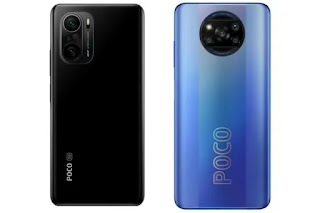 POCO today has announced two new phones for the global market in the form of F3 and X3 Pro. Surprisingly, both of them will be heading to Malaysia this week itself with F3 that will be available for purchase on 27 March which will come in just a few days after the release of X3 Pro on 24 March. 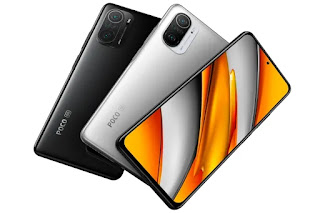 The F3 is essentially a rebranded Redmi K40 that was released in China late last month which is why it carries the same physical design and specifications. Powered by Qualcomm Snapdragon 870, the phone also features a 6.67-inch Samsung E4 AMOLED Full HD+ display that also has a 120Hz refresh rate, 360Hz touch sampling rate, and maximum brightness level of 1300nits. 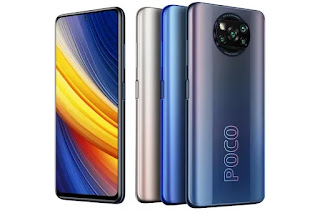 On its back is the phone’s main camera which is equipped with a Sony IMX582 48MP sensor and f/1.79 6P lens that is being accompanied by an 8MP f/2.2 ultrawide camera and 5MP f/2.4 telemacro camera. A 20 MP f/2.4 selfie camera completed F3’s photography and videography hardware.

The F3 also carries a 4520mAh battery that supports a fast charger with a power rating of up to 33W which is also included in the box alongside the phone. Yes, the Hi-Res Audio certified phone is still equipped with an IR blaster as well as a side-mounted fingerprint sensor, Dolby Atmos enhancement, and dual speakers.

As for the X3 Pro, it is generally a souped-up variant of the X3 that was released in Malaysia last September. Hence, the phone still carries some of the same features as per the standard X3 including a 6.67-inch Full HD+ LCD display with 120Hz refresh rate and 240Hz touch sampling rate as well as LPDDR4X RAM, 2MP macro camera, 2MP depth sensor, 20MP front camera, 5160mAh battery, and the support for 33W fast charger. 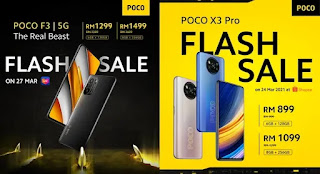 However, those who are planning to be early adopters of F3 should get it straight on 27 March through Xiaomi Official Store Global on Lazada, since the phone will be priced at RM 1,299 and RM 1,499 instead. If X3 Pro is your choice, then head on to Shopee’s version of the store on 24 March in which the phone will be made available for RM 899 and RM 1099.
at March 25, 2021
Email ThisBlogThis!Share to TwitterShare to FacebookShare to Pinterest
Labels: A, F3, Heading, Malaysia, of, POCO, Price, RM899, Starting, This, to, Week, With, X3Pro