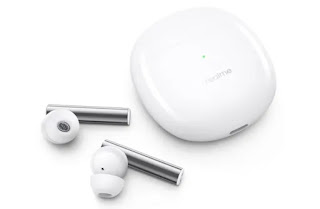 realme has recently announced its plan to launch the new Buds Air 2 in Malaysia next month. Based on the specs stated on realme Malaysia’s website, the new true wireless earbuds (TWEs) seemed to offer plenty of upgrades over their predecessor while being made available at a much lower price point.
In many ways, the Buds Air 2 seemed to carry on the torch from the Buds Air Pro rather than the original Buds Air. Powered by the brand-new R2 chip, the second generation model adopts the in-ear design and also features active noise cancellation (ANC) although at up to 25db, the effective range is not as high as the Buds Air Pro that can go up to 35db. 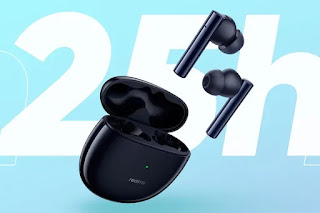 Equipped with a pair of 10mm drivers which realme claimed have been covered with carbon coating to make them more durable, the Buds Air 2 also features a mode called Bass Boost+ that apparently was co-created by the well-known EDM duo, The Chainsmokers. The new TWEs have also been designed to meet the IPX5 standard which means that they should be able to withstand sweats during your workout.

In terms of battery life, the TWEs can run for up to 4 to 5 hours depending on whether the ANC is on or off while the total operational hours can go up to 25 hours when you add Buds Air 2’s charging case into the picture. There is also a fast charge feature that allows users to obtain 2 hours of playback with 10 minutes of charging time.

Price-wise, the new realme Buds Air 2 goes for RM 199 when it is made available in our shores at realme Brand Store and authorised dealers nationwide on 3 April 2021. For those who prefer to purchase the TWEs online, they can do so starting from 8 April via realme’s official store at Lazada.
at March 30, 2021
Email ThisBlogThis!Share to TwitterShare to FacebookShare to Pinterest
Labels: Air2, ANC, April, Buds, coming, Form, Malaysia, Realme, RM199, This, to, With