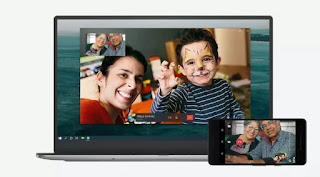 WhatsApp, through its official blog, revealed that video and voice call support has been added to its desktop app on Windows and Mac platforms. As you may recall from our previous report, the new features first entered beta testing in December 2020, but were only made available for a small number of users.
Unfortunately, users of the web version of WhatsApp will be disappointed to know that the new video and voice call features have not been implemented just yet. It is not known when the company is planning to roll out the update for that particular platform.

Launching the new functions on desktop is similar to how it is done via the mobile version of WhatsApp. Simply open up a chat window and then click on either the video camera or phone icon on top to start the respective type of call. Video calls will pop out in a resizable window, and will always appear on top of any opened applications on screen. Of course, a webcam and/or microphone are required in order to initiate these calls.

However, the Facebook-owned messaging service noted that the new features are only available for individual chats, and would eventually be expanded to groups at a later time. A blunder on WhatsApp’s end, as this delay will definitely give rival platforms such as Zoom and Skype an advantage in terms of multi-user video conferencing.

Surprisingly, WhatsApp is still offering new quality-of-life features to its users, despite receiving a tremendous amount of backlash for its upcoming policy change. However, these new additions and a majority of the platform’s functionality will eventually be stripped off from those who insist on refusing to accept its new privacy changes by 15 May 2021.