JKJAV To Open Another Registration Session For AstraZeneca Vaccine Soon 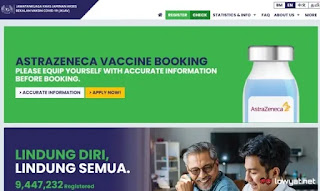 The Special Committee on the COVID-19 Vaccine Supply (JKJAV) will be announcing another registration session for the AstraZeneca (AZ) vaccine sometime next week. This was revealed by the coordinator of the National COVID-19 Immunisation Programme (PICK), Minister Khairy Jamaluddin via Twitter earlier today.

Minister Khairy also said that the Vaccine Administration Centres (PPV) for the distribution of the AZ vaccine outside of Klang Valley will be announced at the same time as well. However, the exact day and time of the announcement were not revealed through the tweet.

The minister has previously shared that thousands of people have cancelled their vaccine registration in MySejahtera after the government announced that it is about to roll out the AZ vaccine through PICK. Hence, it was then decided that the AZ vaccine be given a separate distribution channel while still being deemed as part of the PICK.

A separate registration process was then opened last Sunday which saw all of the 268,000 available doses to be fully reserved within 3 hours 20 minutes even though there were some hiccups during the early portion of the registration session. The subsequent distribution of the AZ vaccine took place yesterday and will last until early June.

at May 07, 2021
Email ThisBlogThis!Share to TwitterShare to FacebookShare to Pinterest
Labels: Another, AstraZeneca, for, JKJAV, Open, Registration, Session, Soon, to, Vaccine