Signal Tried To Use Facebook’s Ad System Against Facebook

Signal, the privacy-focused messaging app, said it tried to run Instagram ads to highlight how much information Facebook collects about users. Facebook, in turn, accused Signal of pulling a disingenuous “stunt”.
Signal said it tried to run a “multi-variant targeted ad” on Instagram, using Facebook’s own advertising tools to show people how they’re being targeted by ads. Facebook has been frequently bashed for collecting and using reams of personal user data for advertising purposes.

According to Signal, Facebook rejected the ads and disabled its ad account. “Facebook is more than willing to sell visibility into people’s lives, unless it’s to tell people about how their data is being used,” the messaging app said. 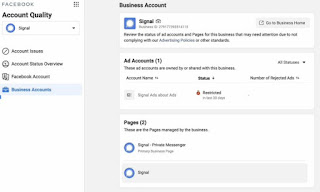 Facebook, on the other hand, denied it shut down Signal’s ad account and claimed that the latter didn’t even try to actually run the ads in question, a CNBC report said.

“If Signal had tried to run the ads, a couple of them would have been rejected because our advertising policies prohibit ads that assert that you have a specific medical condition or sexual orientation, as Signal should know. But of course, running the ads was never their goal — it was about getting publicity.”

Signal, of course, disputed this, reiterating on Twitter that the ads were indeed rejected and providing screenshots of their disabled ad account.

at May 17, 2021
Email ThisBlogThis!Share to TwitterShare to FacebookShare to Pinterest
Labels: Ad, against, Facebook, Facebook's, Signal, System, to, Tried, use