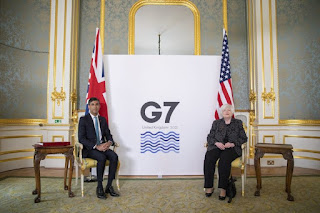 The G7 nations, which include some of the world’s richest countries, have agreed to a minimum corporate tax rate of 15%. The development is important because several member countries have been feuding over digital taxes that the US argues unfairly targets its companies.
The agreement aims to force large, profitable multinational companies to pay taxes where they operate – not just where they base their headquarters. For many years, large MNCs – especially tech companies – have been accused of not paying enough taxes or shifting profits overseas to avoid taxes.

US Treasury Secretary said the deal would end the practice of countries racing to the bottom on corporate taxation, Reuters said. She also said that European countries would repeal their digital services taxes because of it.

The US, which is part of the G7, has been threatening to slap punishing tariffs on six countries, including fellow G7 members Britain and Italy, over their digital taxes. The UK previously defended its digital tax as “reasonable, proportionate and non-discriminatory.”

Facebook, Amazon, and Google all seem publicly supportive of (or are at least resigned to) the G7 tax deal, according to CNBC’s reporting. The G7 (Group of Seven) nations are the US, the UK, Canada, France, Germany, Italy, and Japan.

at July 04, 2021
Email ThisBlogThis!Share to TwitterShare to FacebookShare to Pinterest
Labels: Agree, Amid, CorporateTax, DigitalTaxes, Feud, G7, Minimum, Nations, Over, Rate, to