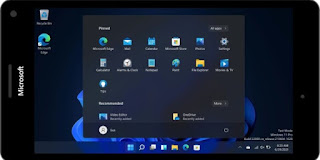 Microsoft released the Windows 11 preview build earlier this week and many fans and enthusiasts are jumping on it. And while the OS has been frustrating PC owners whose systems “don’t meet” the new TPM 2.0 requirement, one user has seemingly thought outside the box: installing the OS on a nearly six year old Lumia 950 XL.
The feat was performed by French engineering student Gustave Monce, who also posted a video of his effort on YouTube. According to Monce, he says that he managed to get an ARM64 build of Windows 11 running on the old Windows phone after “a day of work” and the results are, in a word, fascinating.

As a quick primer, the Lumia 950 XL was launched back in 2015, which was pretty much the twilight years of Microsoft’s Windows Mobile OS for smartphones. Specs-wise, the phone ran on a Snapdragon 810, 3GB RAM, 32GB of expandable storage, and had a 5.7-inch WQHD display.

Naturally, it goes without saying that Windows 11 was never made to be backwards compatible with the last of Microsoft’s Windows mobile devices. Having said that, the video shows the device being able to orient from portrait to landscape mode, albeit not seamlessly.

What is even more impressive is that Monce also managed to make the device capable of making and receiving phone calls. Why is this impressive? Because Windows 11 doesn’t ship with a phone stack, which means Monce actually had to create that part of the stack from scratch.

At the end of the day, it’s clear that Monce’s efforts are really just for fun, and there is no denying that it is quite refreshing to see what is an already ancient device – in technological terms, that is – capable of running Microsoft’s OS replacement for Windows 10.

at July 07, 2021
Email ThisBlogThis!Share to TwitterShare to FacebookShare to Pinterest
Labels: 950, A, Get, Lumia, Managed, on, Running, Someone, to, Windows11, XL