WhatsApp Rolls Out ‘View Once’ Feature To Beta Users on Android 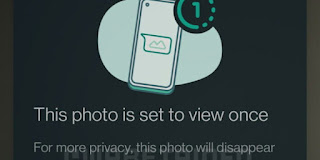 WhatsApp has begun to roll out a new feature known as View Once to beta users on Android. This particular feature is one of three new functionalities for the messaging app that has been confirmed by its CEO, Will Cathcart as well as CEO of Facebook, Mark Zuckerberg to WABetaInfo earlier this month.
Meant to deliver more privacy to users, this feature allows them to send photos and videos that would disappear immediately after it is viewed and closed by the recipient. This is opposed to the existing Disappearing Messages feature, whereby users can set their messages to be automatically removed from WhatsApp after seven days.

At the same time, users would also be notified once the media file has been viewed by the recipient. This option can also be enabled for groups and even recipients that have not activated or yet to receive the feature on their device.

However, do note that recipients can still screenshot View Once’s photos or videos before they are deleted which is something you have to be mindful about, since WhatsApp does not have a built-in screenshot detector. WABetaInfo has also said that iOS beta testers will have access to View Once soon, but didn’t mention any exact rollout date for them.

at July 07, 2021
Email ThisBlogThis!Share to TwitterShare to FacebookShare to Pinterest
Labels: Android, Beta, Feature, on, Once, Out, Rolls, to, Users, View, Whatsapp