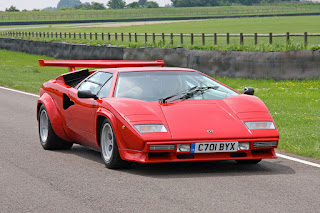 It was 50 years ago that Lamborghini took off the drapes from the first prototype of its then-new Countach supercar during the 1971 Geneva auto show. The vehicle would then end up becoming one of the manufacturer’s more iconic releases in the following years, and a car that almost every 80s kid dreamed of owning one day.

To celebrate the Countach’s half-century anniversary, Lamborghini recently announced that it will unveil a new model soon. Specifically, during the ongoing Monterey Car Week event in a couple of more days. It’s also worth pointing that this is the first time the esteemed Italian supercar manufacturer has ever recycled a previously used moniker, as newer generation releases are often christened with newer names that are often inspired by the bullfighting scene (ie: the Diablo, Aventador, and Huracan are actually named after famous Spanish fighting bulls).

The announcement also saw the manufacturer releasing a 20-second long promotional video for the new model and a teaser photo (shown above). The latter being the more interesting of the two, as it showcases the next generation Countach wrapped up under a sheet. This also gave us a brief glimpse of its design, although it is hard to tell whether Lamborghini has done any modern updates to the vehicle.

As usual, the manufacturer is holding back details of the new Countach for its upcoming unveiling. However, Roadshow reports that a recent leak in Instagram revealed the car’s full name to be the Countach LPI 800-4. LPI stands for “Longitudinale Posteriore Ibrido” (or Longitudinal Posterior Hybrid in english), a designation that was previously used by Lamborghini’s 2014 Asterion hybrid concept. This suggests that the new supercar may feature a hybrid powertrain, while the “800” is believed to represent its horsepower output and the “4” indicates that it would feature an all-wheel drive powertrain. As usual, it is best to take this information along with a healthy dose of salt for the time being.

Seeing that the new model is intended to celebrate Countach’s 50th anniversary, it is unlikely for it to be a production replacement for Lamborghini’s Aventador. That being said, it is also believed that the car would be a limited edition release, aimed towards collectors and enthusiasts alike.

at August 21, 2021
Email ThisBlogThis!Share to TwitterShare to FacebookShare to Pinterest
Labels: 50th, A, Anniversary, by, Celebrate, Countach’s, Lamborghini, Model, New, Soon, to, Unveiling