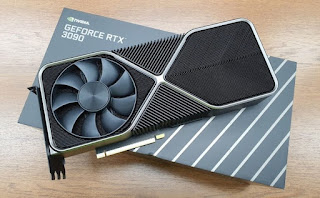 As NVIDIA reportedly preps its next-generation GPU architecture, Ada Lovelace, rumours have surfaced that the GPU brand plans on sending off its current Ampere lineup with one last hurray. That hurray, by the way, is rumoured to come in the form of a GeForce RTX 3090 Super.

Rumours of the RTX 3090 Super first came to light via prominent leakster Greymon55 (@greymon55), who said that the card was going to ship out with 10753 CUDA cores, which is 256 CUDA cores more than the current RTX 3090. Additionally, they also said that the card would require upwards of 400W of power to run, which clearly exceeds the current 350W TGP of the RTX 3090.

Less than a day after that rumour, another popular leakster, kopite7kimi (@kopite7kimi), posted more information about the RTX 3090 Super, saying that the card TGP was higher at 450W. Further, the card also would not have an NVLink unlike the RTX 3090, because SLI is pretty much dead at this point. On that note, it doesn’t appear that the card’s 24GB GDDR6X memory is getting increased, but until its launch, that is still up for change.

Another interesting plot point is that the RTX 3090 Super is expected to run on a new GA102-350-A1 architecture, along with GDDR6X memory running at 21Gbps. Again, for context, the GDDR6X on the currently existing RTX 3090 run at 19.5Gbps, which is already extremely fast. Even more interesting, though, is that kopite7kimi says that NVIDIA plans on launching the RTX 3090 Super before the year is out.

As exciting as this news may sound to us, it should also be noted that these rumours do not mention or affirm if NVIDIA also plans on releasing other Super variants of other RTX 30 series GPUs, including the RTX 3060, RTX 3070, and RTX 3080. That said, the chances of that happening for the latter two models are exceedingly slim, seeing how the company just recently launched the “Ti” versions of said cards.

If these rumours actually do become reality, it is also likely that NVIDIA’s AiB partners will have no choice but to fit their own custom-cooled versions of the GPU with no less than three 8-PIN PCIe power ports in order to run the card. That, or adopt the 12-pin power connector that NVIDIA uses on its Founders Edition cards.

On that note and as always, NVIDIA has neither confirmed nor denied the existence of such a card, as is the brand’s policy. So, take this news with a liberal sprinkling of salt.