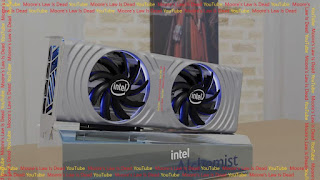 Alleged renders of Intel’s soon-to-be released ARC Alchemist graphics cards have seemingly made their way online. Well, artistic impressions of the cards, to say the least.

Potential renders of the ARC Alchemist’s was first posted by prominent speculator, leakster, and YouTuber, Moore’s Law Is Dead, who says that they had made a request to their friends. Asking if they could do a simple animation of the Intel graphics card’s cooler shroud, based on the accummulated information around it.

Now, this isn’t the first time the YouTuber has leaked details of the Intel’s unreleased consumer-ready GPU. Back in April and when the card was still referred to by the Xe-HPG moniker, the channel had managed to procured images of what was supposedly engineering samples of the GPU’s cooler shroud.

In this case, the renders show the card’s cooler shroud in silver, rather than black. In addition, the 8+6 Pin PCIe connectors can be seen situated at the end of the card’s PCB, although the cooler extends a little further past it; a design trait that both NVIDIA and AMD have adopted for some time now.

In addition to the renders, Moore’s Law Is Dead also speculated that Intel could be gearing up to launch its first-ever ARC Alchemist lineup sometime during the second quarter of 2022, which is also the expected launch window for the chipmaker’s 12th generation Alder Lake mobile CPUs and next-generation gaming laptops.

As always, this is alway merely speculation and as such, take this news with a large grain of salt.