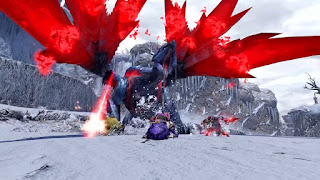 Monster Hunter Rise was released for the Nintendo Switch earlier in March this year. One would think that it would be either six or 12 whole months before a PC port made an appearance. At the Tokyo Games Show, Capcom announced that it was neither, but closer to the latter. Specifically, the game will be available on PC from 12 January 2022 onwards.

The PC version of Monster Hunter Rise will come with all the extra features that you’d expect for the platform. Among them are things like widescreen support, 4K resolution, higher framerates and better higher resolution textures. It will also come with in-game voice chat support.

Being released so late in its life cycle, the PC version of Monster Hunter Rise will also come with all the DLC that’s available to the Nintendo Switch, at least up until November 2021. For those who want to experience the game earlier, Capcom also says that a demo for the game will be available on 13 October.

Prior to the PC release of Monster Hunter Rise, Capcom also announced an expansion for the game, Sunbreak, which is set to release in summer 2022. For those of us without four seasons, this means between late June and late September. And it will be a simultaneous release for both platforms. Which makes the timing of the base game’s PC port a little strange, if not outright late.

at October 01, 2021
Email ThisBlogThis!Share to TwitterShare to FacebookShare to Pinterest
Labels: 12, 2022, Comes, Hunter, January, Monster, on, PC, Rise, to