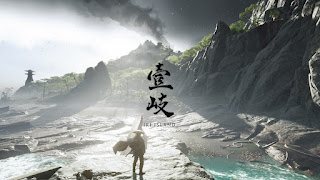 You’re probably tired of hearing this from me, but Ghost of Tsushima is great. And it got even better when Sucker Punch Productions gave it a free multiplayer component. For the most part, that’s already a lot to give for a single game, and many were expecting the studio to work on a sequel. But then the company announced a Director’s Cut, which included the Iki Island expansion.

And to put it simply, the expansion is also great – for all the same reasons that made the base game so enjoyable. So let’s talk about that. Being built on an amazing foundation, the only remaining element was a new story to tell, and boy did Sucker Punch pull it off again.

Another setting, Another Mongol Invasion

Being the continuation of the main story in Ghost of Tsushima, the Director’s Cut expansion naturally kept the Mongol invasion as an important part of the story. Very early on, the story makes clear that the events of the Iki Island expansion happen some time after the main game. That, and there is a canon ending to the base game, which forces you to make a decision after the final duel. There is also what I see as a very minor retcon in the base game’s story in order to tell this one. Which is fine, because it wasn’t a major detail back in the base game. 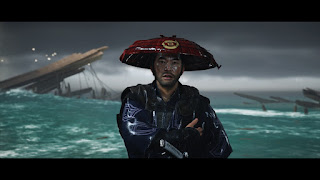 Though this time, the game takes a sharper turn from the road that history has provided. Which is actually fine, because it’s sort of necessary for the story that the expansion is trying to tell. And the story is essentially one of Sakai Jin dealing with the ghost of his own past.

This time, the fictional invading force is an oddly specific Mongolian tribe led by the a Shaman known as the “Eagle”, Ankhsar Khatun. For context, Khatun is the female equivalent of Khan. As the plot progresses, she managed to poison Jin with a special drug that amplifies his darkest thoughts and suppressed memories. And it is through dealing with this poison that Jin faces his past, contemplates what he should or should not have done, and learns to deal with his choices at the end. Again, not the most original of stories, but with a past as grey as his, it makes for a compelling story all the same. 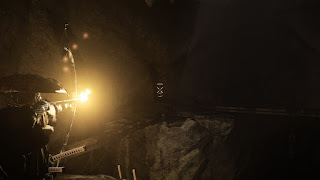 Of course, not everyone is as lucky, or mentally strong, as Jin. Many of the others on Iki Island were poisoned by the Eagle, and have subsequently irreparably lost their minds. And as Jin fights his inner demons, he also helps the locals fight off the Mongols so that this new threat does not take over the island, and move on not only to Tsushima, but the Japanese mainland as well.

Depicting The True Greyness Of The Warrior Class 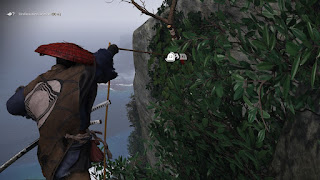 The relative greyness throughout Jin’s past also reflects the greyness of the role of the samurai during that era. This makes it a far more realistic depiction of the warrior class of the time. Quite the contrast to the main game, which reinforces the stereotypical idealised version of bushido.

Without going into anymore detail, it’s safe to say that the samurai had to do some really nasty stuff in order to serve their lord, and act as peacekeepers. Honour in battle is certainly far from the focus this time around, and I’ll leave it there to avoid the risk of spoiling the story any further.

New Toys To Play With 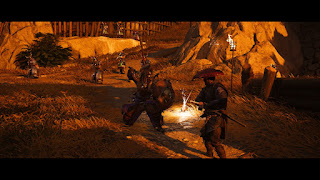 There are also three new enemy types added to Ghost of Tsushima Director’s Cut. One, which you’ll be introduced to very early on, is the shaman, who makes nearby enemies more resilient to damage, and fights like a spearman up close. Another looks like your average grunt, but can swap between dual swords, sword and shield, and pole-arm at will, and even has a unique pole-arm move set. And the final one is a new brute with a double-bladed pole-arm, who is a lot faster than the others in its class. Enemies in general also can take more hits before going down. All that being said, this list looks to be exclusive to the Iki Island region.

On another note, one improvement that you can expect to be transferrable to the main game is more varied stealth assassination animations. Ditto a new chiburi sheathing animation that was previously exclusive to boss duels. That being said, it’s unclear if these are part of the Director’s Cut, or part of the overall improvements that Sucker Punch promised. What’s definitely a new addition thanks to the Director’s Cut is a new armour set with its own unique set of skills, which is a lot of fun and very overpowered if you have quick reflexes in combat. Your horse gets some love too, which comes in both practical and comedic flavours. 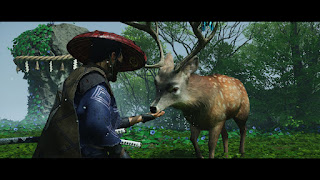 If you like animals, then the Iki Island expansion has a treat for you – mostly in the form of three more animal types that you can pet. Scattered around the new area are animal sanctuaries for the monkey, deer and cat. The expansion adds a new limited gameplay mechanic that allows a more active use of your flute in these sanctuaries. Play them well, and the animals will calm down enough to trust you and let you pet them. They appear throughout the expanded area, but you can only pet them in their respective sanctuaries.

This is still quite the major improvement over the foxes in the main game. Beyond a single quest in Act II, the only time foxes appear are near their dens, from which they lead you to the nearest fox shrine. You can also only pet them once, if you see them after praying to said shrines. Beyond that, the foxes of Tsushima appear to completely vanish from the island. And unlike the foxes, as long as you return to the sanctuaries on Iki, you can pet the animals as often as you like.

PS5 Exclusive Features Not A Must, With One Exception

Having reviewed the Director’s Cut on a PS5, I’ll say that the improvements on this version of the game are mostly unimportant. Sure, you get constant 60fps gameplay rather than 30fps, but the DualSense features like haptic feedback and adaptive triggers are not really all that big an improvement. This is especially the case for the latter, which was a little disappointing after having experienced what Insomniac did with Ratchet & Clank: Rift Apart. 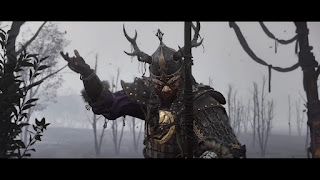 All that being said, if you want Japanese lip sync, then unfortunately the PS5 version is a must. It’s a strange thing to be locked behind the latest-generation console. I don’t know if this is a hardware limitation, and I have a hard time believing that it is the case, but here we are. Translations are still whack, with some names translated completely differently. But since these are remnants of the base game, there isn’t much that can be done there short of overhauling the text of from it. 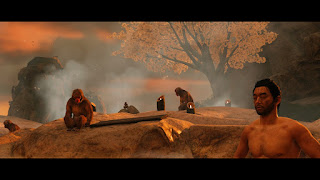 If you can’t get enough of Ghost of Tsushima, then the Director’s Cut is for you. Since it’s built on the bones of such a brilliant game, there’s little that can go wrong. And thankfully, not only did nothing go wrong, but we got another compelling, albeit shorter story experience to continue where the base game left off.

In terms of landmass, the in-game version of the Iki Island is about a third of Tsushima. Though in terms of actual story, it feels a lot more than just a third of the main game. Because of this, the story feels faster – and better – paced. And because of the smaller landmass you can wrap things up pretty quickly. This includes all the side quests, challenges and collectibles, simply because there’s less traversing in between.

For this review, I’ve done almost all there is to do in slightly over 12 hours. Your experience may be quicker if you forgo the collectibles, and play on a difficulty that’s lower than Lethal+. Though that being said, I feel the desire to finish my current playthrough and go for a third one, this time completing the game in canonical order, while making use of the new toys for more of the base game. You don’t have to do that, because in an update quite late into the review cycle, Sucker Punch has added the ability to replay boss duels and outpost captures. 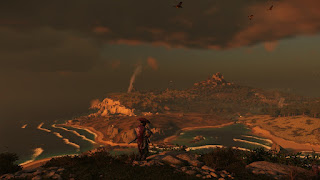 But for all the praise I pile onto this, I must reiterate one criticism. And that’s the fact that Japanese lip sync is locked behind the PS5 version. As I mentioned before, I can live without the DualSense improvements. I can also live without 60fps gameplay, although having it is certainly nice. But by far the one thing that drastically improved my enjoyment of the game is the Japanese lip sync. And it really feels unfair for those who don’t have the console but want to experience Ghost of Tsushima Director’s Cut at its best state, narratively speaking.

If you’ve never experienced Ghost of Tsushima, definitely jump into the PS5 version of the Director’s Cut. If you don’t yet have the console, then I would say you wait until after you get it. For those who have experienced the base game, I’d say that the new elements and replayabllity makes it worth its asking price, regardless of if you’re upgrading to the PS4 or PS5 versions.