Redmi Gaming Smartphone Teased; Confirmed To Be A Variant Of Its K40 Flagship 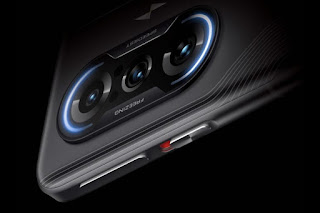 Redmi, via Weibo, has released a teaser featuring a glimpse of its upcoming gaming smartphone. Interestingly, the company also revealed that the new device is actually a variant of its flagship series that was launched back in February and would officially be known as the K40 Game Enhanced Edition.

From the provided image (which happens to be animated), it is revealed that the phone will feature a triple camera setup, hidden shoulder buttons, and a slider switch. The latter, when activated, would release the K40 Game Enhanced Edition’s shoulder buttons and activate the lighting effects on the upper and lower halves of its rear camera array – an interesting yet gimmicky kind of way of announcing to the world that you’re eager to play mobile games on the Redmi-branded handset.

Besides that, the gaming variant also sports a metallic gray rear case with line design elements and a large cylindrical camera island for its triple cameras – an interesting design shift that sets it apart from the original K40 models, which featured two layered bumps for their rear shooters. The brand did not reveal what sensors will be included in the setup, and the dual horizontal spots located in between the top and middle cameras are unspecified as well.

As mentioned earlier, the top and bottom of the camera island features a bracket-like lighting system and the words “Freezing” and “Speediest” are engraved on its sides. The engravings are most likely referencing the Game Enhanced Edition’s cooling system and onboard chipset. Speaking of which…

For now, the only officially confirmed hardware to be included on the new Redmi gaming smartphone is a MediaTek Dimensity 1200 chipset. Meanwhile on the unofficial side of things, it is said that the device will come with a Samsung E4 AMOLED display with 144Hz refresh rate and a 5,000mAh battery with 67W fast charging support. Leakster Digital Chat Station recently shared that the Xiaomi subsidiary may launch the gaming smartphone in two different configurations, but did not supply any information regarding the difference of specifications.

Along with the teaser image, Redmi has confirmed that it will launch the K40 Game Enhanced Edition next week on 27 April in China. According to insiders, the phone is expected to launch at a starting price of RMB 2,000 (~RM1,260).

at May 01, 2021
Email ThisBlogThis!Share to TwitterShare to FacebookShare to Pinterest
Labels: A, Be, Confimed, Flagship, Gaming, its, K40, of, Redmi, Smartphones, Teased, to, Variant