Xiaomi May Introduce A New Extended RAM Feature For Its Smartphones 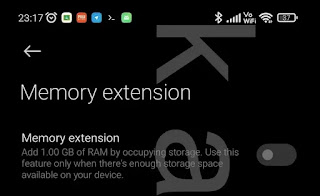 Those with Xiaomi smartphones with low-specced RAM configurations will be delighted to know that the company might be working on a way to upgrade its capacity. Thanks to a recent discovery by tipster Kacper Skrzpek on Twitter, a code to what appears to be an “extended RAM” feature was spotted on an unspecified version of Xiaomi’s MIUI system.

This concept isn’t actually entirely new and is quite similar to the Virtual Memory approach on PC operating systems such as Windows. What this feature does is allocate a certain amount of physical memory aka Read Only Memory (ROM) from the device’s storage, and converts it into Random Access Memory (RAM). This also means that after the conversion, the allocated ROM will be completely unusable for usual storage purposes – that is, until the user decides to reverse the action.

Xiaomi isn’t the first brand to introduce the extended RAM feature on smartphones, albeit allegedly. The honour belongs to fellow Chinese smartphone maker Vivo, who recently debuted it along with its latest handset in Malaysia: the Vivo V21. The latter’s device provides users the option to boost its onboard 8GB RAM up to 11GB by converting 3GB from its 128GB internal storage capacity.

If Skrzpek’s information is proven accurate, Xiaomi’s version functions somewhat similarly to that of Vivo’s. From the screenshots provided by the tipster, the former’s alleged feature is shown to be able to convert 1GB of storage into RAM – although it’s quite possible the amount may change depending on the memory configurations on different Xiaomi phones. Also provided that if the brand is planning to include this ability on all of its future or current devices.

There’s no word on when Xiaomi is planning to debut this feature on its MIUI system or smartphones. Nevertheless, it is going to be a very handy feature to improve multitasking and also gaming, especially for users who are on entry-level handsets from the company.

at May 07, 2021
Email ThisBlogThis!Share to TwitterShare to FacebookShare to Pinterest
Labels: A, Extended, Feature, for, Introduce, its, May, New, RAM, Smartphones, Xiaomi