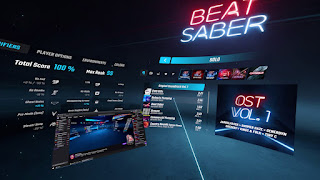 Valve has introduced a neat feature to the latest version of SteamVR, which lets you float windows from your desktop into your virtual space. These windows can be positioned wherever you wish, and would remain there as part of the interface while in-game.

This update is a more flexible approach over the version prior, where users could only bring in a desktop window by attaching them onto your in-game VR controller. The only drawback to this is that you’ll need to lift up your controller in order to glance at the window, which might obstruct your view when playing certain games.

With this new feature, users can simply let a desktop window float anywhere in their virtual space, enabling you to multitask while in a VR game or application. These windows are view-only when you’re in a game or application, and can only be interacted with by pointing at it with your VR controller. On that note, the controller can also be used as a mouse pointer for interaction, such as web browsing or managing content playback via the floating window. Pretty handy, especially if you plan to catch up on a Netflix show while flying a Cessna in Microsoft Flight Simulator – just make sure to keep your plane in the air while doing so.

Although the floating window feature seems like the better alternative, Valve decided to keep the attach-to-controller option just in case. In addition, users can also choose to undock the attached window and position them to float in-game.

To enjoy this new feature, make sure to have your SteamVR beta client updated to version 1.19.6. It’s also worth noting that you can easily opt in to the beta programme by navigating to the app’s Properties window, then to the Betas tab, and choosing SteamVR Beta Update. Upon selecting the option, SteamVR will then download and update to the latest beta version.